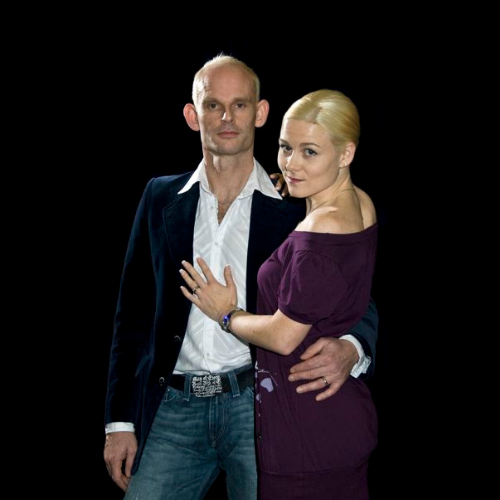 We have taught and performed at some of the finest salsa events in the world including congresses in New York, Brussels, Amsterdam, Norway, Prague, Turkey, Boston, Luxembourg, Antwerp, Manchester, London, Bulgaria, Athens, and many UK-based salsa events. Lisa also broke the Guinness World Record for Spinning in 2008!

We have trained in all styles of salsa and incorporate all our knowledge into our classes. We also do our best to give personal attention within the lessons wherever possible. We are able to answer any question about salsa you may have so just ask! ;).

Contact us for guest teaching and performance or private lessons.

Photos from a couple of our performances...

Lisa has been running salsaOxford since 1996. In 1999 she received a special award for "Services to Salsa in the UK" at the Salsa Personality Awards. In 2000 she achieved 3rd place in the professional category of the first salsa competition in the UK at the Bacardi Congress. She has performed with London-based groups in the UK and abroad and assisted some of the top teachers on the international scene at various events and congresses. Due to the success of her Oxford-based business she was able to concentrate full-time on salsa from 2002 after completing her D Phil at the University of Oxford. Lisa also held the Guinness world record for the most dance spins in one minute ( 125 ) with a partner which she broke with Giles Eadle, at the Great British Salsa Congress in 2008.

Lisa began working with her husband Mark and in 2006 they performed their first show at various UK venues including the Mambocity's 5* Congress. Since then they have performed at many UK and international events. They spent time training with top international dance company Hacha Y Machete who were a great inspiration to them. They also trained the ConTambor student group, made up of students from their classes, which performed its debut in 2007 at The Clave Club in Oxford, and the salsaOxford Improver Student group which performed its debut there in 2008.

They now concentrate on running their local classes and clubs alongside busy family life! They teach many private clients and work extensively in the corporate and educational sector. They have also developed music for learning and teaching salsa 'Salsa Timing' and online courses for people to access salsa at home 'SalsaLisa'. They believe that latin music and dance (especially salsa) should be accessible to absolutely everyone!

back to Team page
Copyright © 2023 SalsaOxford  |  All Rights Reserved